The novelist, literary critic and short story writer Namwali Serpell was born in Zambia 16 years after her country threw off colonial rule. She is the daughter of a British-born Zambian psychologist, Robert, and a Zambian economist, Namposya Nampanya-Serpell. She and her sisters grew up in the Zambian capital of Lusaka, as well as in Hull, England, and Baltimore, where their parents’ nomadic work took them.

The author, a professor of English at the University of California, Berkeley, earned her doctorate at Harvard University. She began writing “The Old Drift” as a senior at Yale University and worked on it episodically for the next 18 years. From the beginning, she and her friends would joke, “It’s the great Zambian novel you didn’t know you were waiting for.”

Talent and timing turned the jest on its head when “The Old Drift” became one of the most savored and acclaimed books of 2019 – “a feat of boundless imagination, thrumming with inventiveness,” as Anisfield-Wolf juror Joyce Carol Oates describes it. British novelist Ali Smith calls the story “a sprawling life force,” a book she wished she had written. And in March 2020, “The Old Drift” won a $165,000 Windham-Campbell literature prize.

“A feat of boundless imagination, thrumming with inventiveness,…”

Bantu words pepper “The Old Drift,” as do Italian and Telugu ones. “The local news is still delivered in seven languages,” Serpell told the Los Angeles Times about Lusaka. “My parents speak two different Bantu languages, and even my sister and I speak different languages; so, we all speak to each other in English. We speak Nyanja, Namwanga, Mambwe and Bemba. I tend, when I think in Zambian words, to think in Bemba, not Nyanja.”

The novel spools out from a fateful 1904 incident set in a hotel bar near the Old Drift, a colonial settlement on the Zambezi River where the waters are quiet enough to drift across in a boat. This accident involving a local busboy, an Italian hotelier and a British photographer reverberates across three generations and 566 pages.

Towering close by is the natural wonder dubbed “Victoria Falls” by David Livingstone, but called Mosi-oa-Tunya or “The Smoke That Thunders” for the many centuries before the British explorer came across it. “The Old Drift” is “a phenomenal accomplishment, nothing less than a retelling/reimagining of the creation and ‘history’ of Zambia,” observes Anisfield-Wolf juror Rita Dove. “The writing is exquisite; her descriptions of water – Victoria Falls, Lake Malawi, even rain – are awesome.”

She wrote the opening paragraph in 2000 and the Old Drift section after visiting the Zambian site in 2013. When Serpell won a Caine Prize in 2015 for her story “The Sack,” she envisioned it as the final chapter of “The Old Drift.” In the last edits, she cut it away. Late in the writing process, she tucked in a Greek chorus of mosquitos, a hive mind that comments on the human foibles – a literary device that came to her in a dream. “I think there’s a strong correlation – and again I’m citing Nabokov here – between memory, dream and the creation of literature,” Serpell told The New Yorker. The book itself uses a tiny drawing of a single mosquito like an asterisk to create breaks between passages that romp across the pages.

The reader can detect multiple influences: Gabriel García Márquez’s “One Hundred Years of Solitude,” Salman Rushdie’s “Midnight’s Children” and Zadie Smith’s “White Teeth.” Serpell has said the heady London mix of cultures in Smith’s breakout novel – also started when Smith was an undergraduate – reminded her of the Lusaka of her early childhood.

When Namwali was 8, her family relocated to Baltimore, a jolt she described to an audience at the Library of Congress in 2016: “I was born into this family in which race was taken for granted as something inconsequential in how you were treated. When we came to the States, there was an immediate imperative to choose. You had to choose, are you black or are you white?  . . . There is a lot of pressure to fit into the binary logic of the States. So it was nice to have a president who is halfrican, as we like to say, African and American.”

The family returned to Lusaka for a year when Namwali was 15 so her mother could conduct research for her dissertation on the economic impacts of HIV/AIDS on orphans – an interlude critical in the writer’s relationship to Zambia. It led, decades later, to a novel that traces Zambian history and its imagined future, mixing mythology, murder, science, politics and the search for a cure for AIDS. She sees it more easily translated into a graphic novel or a television series than a film.

“There are moments when you think ‘Wow, the young Márquez is reborn in Zambia,’” notes Anisfield-Wolf juror Simon Schama. “But the breadth of her storytelling – from the transport of Livingstone’s corpse (stunningly told) to the world of contemporary Lusaka – is so brave and extraordinarily well done. Her ear for the diction of leftover colonials, Afro-radical politics of the ‘70s and ‘80s, barflies and the rest is pitch-perfect. It’s just a wonderful, deeply African novel.”

Serpell lives in the Mission neighborhood of San Francisco but returns to Zambia frequently. Her nonfiction book of essays, “Stranger Faces,” will publish in September 2020. She is currently under contract for another book exploring her love-hate relationship with the novel “American Psycho.” 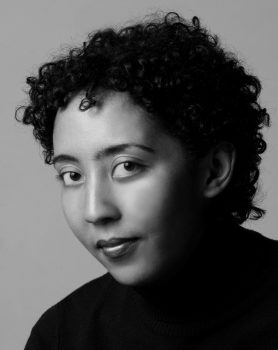 The novelist, literary critic and short story writer Namwali Serpell was born in Zambia 16 years after her country threw off colonial rule. She is the daughter of a British-born Zambian psychologist, Robert, and a Zambian economist, Namposya Nampanya-Serpell. She and her sisters grew up in the Zambian capital of Lusaka, as well as in Hull, England, and Baltimore, where their parents’ nomadic work took them.