Donika Kelly spent her first 13 years in Los Angeles, born into a time and place where tenderness, as she describes it, was elusive. “The Renunciations” responds to her childhood trauma and exists in part to recast its meanings. It also speaks to a wife and lover exiting the speaker’s life.

“I was born in L.A., in the early 1980s, and we lived mostly in South Central or Compton,” Kelly told Nikky Finney, who selected her first collection, “Bestiary,” for the 2015 Cave Canem prize. “I associate the space with a kind of personal and social constriction, with pain and helplessness. Violence was quotidian. Fear was quotidian.”

“I witnessed, sometimes firsthand, sometimes second, police brutality against my family, particularly my father,” Kelly told Finney in an interview published in the Los Angeles Review of Books. “I witnessed, from our little kitchen window, the L.A. riots in the early ‘90s. We lived in a Blood neighborhood when I was in middle school, but my grandmother lived in a Crip neighborhood, so we were always navigating between those spaces. Some colors were off limits to us. Some gestures.”

In “The Renunciations,” Kelly writes toward a radical shift in one’s sense of self in the face of trauma. In her interviews, she gives much credit to her therapists, a community to whom she dedicated her first book.

In a poem from “The Renunciations” entitled “Donika Questions the Oracle,” she writes:

Did he ever delight, oracle, in anything

a child might? Did he look for his name in the sky?

Did he ride a bike, made from junk parts,

In the South Central LA sun as fast a boy might?

Surely he did that, oracle, surely that.

Kelly reflected on this compassion with the poet Ladan Osman, in an interview for Writers & Books, a literary arts center in Rochester, New York.

“This has to do with the title as well, there’s a story that I was telling myself about my experiences,” Kelly told Osman. “And that story kept me enthralled to a bunch of bad ideas about how to relate to people and what I was worth. In doing the work of writing these poems, and the attendant many hours of therapy, I have come to understand the poems as . . . interrogating the story about the memory. Why does this have the hold on me it has, am I ready to do something different, is there another way to understand what is happening here? It doesn’t change what happened to me, but it changes my relationship to myself.”

Anisfield-Wolf Juror Rita Dove lauded these poems: “Several mini-sequences are woven throughout; their periodic reappearance – the “Dear –” erasures, Self-Portraits, Sightings, Oracles – acts as a subtle yet devastating reminder of the cycle of violence. I returned to Kelly’s book, and she set me gasping anew. This is poetry of the highest order.”

Kelly’s road toward literature was steady but circuitous. She started to write poems again as a senior in high school, albeit bad ones, by her account. She matriculated from the University of Arkansas, then headed to Austin, Texas, to study at the Michener Center for Writers, where she began to find joy in the writing process.

“I wish people would talk about their writing practices with more of that joy,” Kelly told The Creative Independent. “I just know people love their own work, because why else would you do it?”

In Tennessee, she earned a doctorate in English from Vanderbilt University, specializing in American literature and film studies. In Nashville, her writing also cohered into what became “Bestiary.”

“My poems come out of my experience, my understanding of the world,” Kelly told PEN America. “My experiences are shaped by my identity as a Black lesbian for sure, and also by my affiliate connections — to family, to friends, to students, and to colleagues. My poems are always Black, always queer, and always situated within a larger frame of connection.”

Kelly is a professor of creative writing at the University of Iowa. She lives with her wife, the nonfiction writer Melissa Febos, in Iowa City. 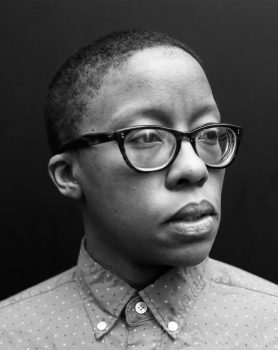