Isabel Allende—novelist, feminist and philanthropist—is considered the most widely-read writer working in Spanish, having sold more than 67 million books. At 40, she burst upon the literary scene with her first novel, The House of the Spirits, begun as a farewell letter to her grandfather, who was dying at age 100.

Born in Lima, Peru, to Chilean parents, she was a second cousin to Salvador Allende, elected Chile’s president in 1970, and killed in Augusto Pinochet’s military coup three years later, a defining event in the life of a nation and the Allendes. “This sounds very corny but my life has been determined by two things that have been extremely important: love and violence,” the writer says. “There is sorrow, pain and death, but there’s another parallel dimension, and that is love.”

Allende’s gift for storytelling has yielded 21 books translated into 35 languages. The protagonists are frequently strong women; the genre is often magical realism. Allende has written three plays, several children’s books, an opera and a luminous memoir, Paula, about her daughter’s untimely death at age 29. It is sometimes singled out as her finest book.

In 2014, former President Obama awarded Allende the Presidential Medal of Freedom, the United States’ highest civilian honor. (She became a citizen in 1993, but thinks of herself as half Californian and half Chilean.)

Not quite five-feet tall, Allende jokes about her stature and longevity—“I look good for my age, don’t I? It takes a lot of work and money.” Her poignant, laugh-out-loud Ted Talk in 2007 about leading a passionate life has attracted more than 3.5 million viewers.

The death of her daughter, Paula Frias, from a rare blood disorder, created a three-year writer’s block in Allende, and eventually, the Isabel Allende Foundation, established in 1996 with the proceeds from the eponymous memoir. It works toward the betterment of girls and women.

“It is a wonderful truth that the things we want most in life – a sense of purpose, happiness and hope – are most easily attained by giving them to others,” Allende writes in a credo inspired by her daughter.

The author, who lives in San Raphael, California, makes a ritual of beginning all her books on January 8, the date on the original 1981 letter to her grandfather.

“I am a writer because I was blessed with an ear for stories, an unhappy childhood, and a strange family. (With relatives as weird as mine there is no need to invent anything. They alone provide all the material for magical realism.),” she says. “Literature has defined me.” 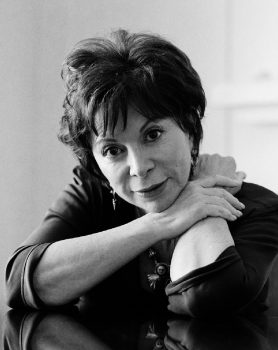