Sonia Sanchez—poet, playwright, activist and educator—is an architect of the Black Arts Movement, a mid-20th century renewal of black will, energy and artist awareness. She has spent most of her 84 years calling all types of people toward freedom and dignity with her pen and her voice. Sanchez is celebrated for elevating the performative aspect of language, its musicality and repetition, and for her storyteller’s electric rapport with audiences.

“I write to keep contact with our ancestors and spread the truth to people,” Sanchez says. Anisfield-Wolf Book Awards Jury Chair Henry Louis Gates Jr. describes her work in both the Civil Rights and Black Arts Movement as molding generations.

Born in Birmingham, Alabama, Sonia was christened Wilsonia Benita Driver, after her father, Wilson Driver. At age one, her mother, Lena Jones Driver, died in childbirth, and Sonia came into the care of her paternal grandmother. She taught Sonia to read at age 4. When she also died, a bereft Sonia developed a stutter. Her father took her and her sister north to Harlem in 1943.

For a time, the stutter made Sonia into an introvert and tuned her ear even more acutely to language. She eventually overcame her speaking impediment and excelled in school. She often describes her revelatory discovery, at age 19, of the Schomburg Center for Research in Black Culture, part of the New York Public Library.

Sanchez graduated with a bachelor of arts from Hunter College in 1955, then continued her studies with the poet Louise Bogan at New York University. In Greenwich Village, she started a writer’s workshop and launched the Broadside Quartet with Nikki Giovanni, Haki R. Madhubuti and Etheridge Knight.

Sanchez married Albert Sanchez, an immigrant from Puerto Rico, with whom she had a daughter. She divorced him but kept his surname, then married Etheridge Knight, with whom she had twin sons. She was active in the Congress of Racial Equality, taught fifth grade in Manhattan, and insisted on the rights of women. She and Knight divorced in 1972. That year, she joined the Nation of Islam, only to leave because of her experiences with its gender rigidity.

In 1969, she published her first poetry collection “Homecoming,” which carried the blues in both form and content. Sanchez is known for infusing musical traditions with poetic forms such as haiku and tanka. Everywhere in her work is attention to sound. This is her “Blues Haiku:”

Sanchez is credited with pioneering a black studies course in 1968 at what became San Francisco State University, a first at a majority white institution. Later, Sanchez introduced the study of black women writers at the University of Pittsburgh. All told, she lectured on more than 500 campuses and spent 40 years teaching.

“What I say to my students is that… ‘you have to keep foremost in front of you the idea of peace, the idea of freedom and the idea of justice,’” Sanchez told The Washington Post. “At some point, you have to know that when you write, you are either maintaining the status quo or you’re talking about change.”

She became the first Presidential Fellow at Temple University and taught women’s studies and English until her retirement in 1999. She has published more than a dozen poetry collections, most recently “Morning Haiku.” She served as Philadelphia’s first poet laureate from 2012-2013.

Sanchez is emphatic in the centrality of her work addressing love, but “not just the love of a relationship. It was a love for our people, the love for our children, the love in a vast sense for humanity – the love that goes beyond one’s private self, but to that public self.”

Last year, the American Academy of Poets awarded Sanchez its $100,000 Wallace Stevens prize, its award for lifetime achievement. Chancellor Terrance Hayes said, “Her life and poems reflect a steadfast devotion to humanity, a love for womanhood, black culture, and education… There may never have been a more appropriate recipient of an award honoring poetic mastery and originality.” 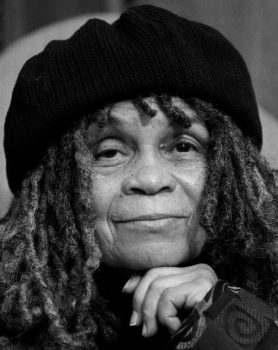